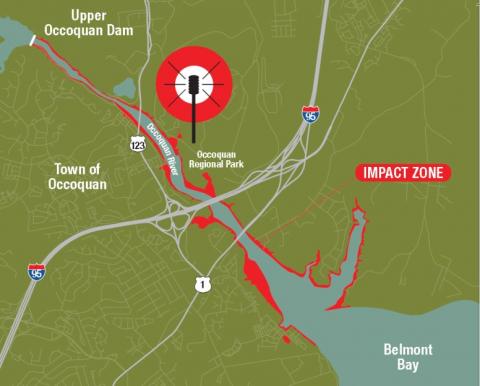 An audible test of the Occoquan Dam siren system installed along the banks of the Occoquan River between the Town of Occoquan and Belmont Bay will be held at 10 am on November 13, 2019. People living and commuting in the area will hear a loud siren at that time.

Fairfax Water is responsible for the test which is expected to be an annual exercise to test functionality. “The test is diagnostic and ensures functionality of the connections and control system which were recently upgraded,” said Susan Miller, Fairfax Water’s public affairs officer.

An additional purpose for the event is to help residents and tourists become accustomed to the presence of the siren and how to react in the event of an emergencyat the dam.

In the unlikely event of a structural failure at the dam, a loud siren will sound, and residents and visitors will be expected to vacate to higher elevations to avoid rapidly approaching water. A map on the related web site marks “impact zones” which primarily effect the historic district of Occoquan. Those on the water at the time of the siren are encouraged to get on land as quickly as possible. The map and instructions can be found at www.occoquandamsiren.com.

The Occoquan Dam, known as “the High Dam” was built i n the early 1950s to create the Occoquan Reservoir that now holds approximately 8.3 billion gallons of water. The dam is inspected and maintained on a routine basis. The structural integrity of the Occoquan Dam is very sound.